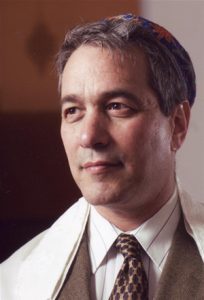 It is an honor to be here this evening. I last spoke from this bimah 23 years ago and became the rabbi of the synagogue 34 years ago; I see so many people here this evening who were present back then, all sitting in exactly the same seats. In 1995, CSZ held a celebration called 18/10’it was the synagogue’s 18th anniversary and the tenth anniversary of my ordination as a rabbi. Daniel of course was there. Daniel was always there. In fact, it was so taken for granted that Daniel was there, well…

If you called him on the telephone – to be clear, this was back in the day when, if the phone rang – in your house, not your pocket – you answered it, because, you know, only bourgeois people had an answering machine – Ring, ring, ring…”Speaking!” or perhaps ….Ring, ring.. “This is he!”

I have to say I wrote a beautiful drash about Daniel and his importance to CSZ, to gay Jews and therefore to the Jewish people in our generation, but – in honor of Daniel’s personal style – I lost it somewhere on the computer. So I’ll just offer a few off-the-cuff remarks.

In 1977, inspired by Beit Chaim Chadashim in Los Angeles, the first Reform synagogue with an outreach to gay and lesbian Jews, three gay yeshiva-educated young men decided that they would start a group for gay Jews. There had been an earlier organization a couple of years ago, kind of a gay Jewish brunch gathering, but this was to be an explicitly Jewish religious – as well as communal – gathering. They went to visit the rabbi of the big Reform synagogue, Temple Emanu El to explain their goal and ask for a meeting space. Rabbi Asher, who was born in Germany before the war and would have preferred perhaps to have lived a century before that, listened patiently, and then looked at the ceiling in his office and said: “Our singles group meets on Wednesday evenings.” No, they explained, we are “homo-sex-u-als!” Silence. “Our singles group meets on Wednesday evenings.”

Despite rejection and resistance from the organized Jewish community – including the refusal of the Northern California Jewish Weekly to print an ad from Sha’ar Zahav – the founders persisted. Early meetings were in a Buddhist temple, a city mental health center and Glide Memorial Church; for some occasions, Congregation Sherith Israel hosted. When I first attended CSZ in 1978 or so, it was meeting in it what was to become the Women’s Building; it stayed there until only exclusively-women-led organizations were permitted. Until purchasing its first property on Danvers Street, CSZ was hosted at the old JCC building on California Street.

From the beginning, Daniel was there. After co-founding the shul, Daniel was its first Co- President; for many years, CSZ had a very strict commitment to affirmative action and there was always a male and female Co-President (as my students point out to me, that is so binary!). Daniel, as one of the more Jewishly educated early members, was a mentor and guide to generations of CSZ leaders, especially committed to ensuring that women who might have not had the benefit of a formal Jewish education could become service leaders in the synagogue. Daniel loves to tell the story of Sha’ar Zahav’s first Chanukah party at which the men made the latkes and the WOMEN DID NOT. Daniel served on the Search Committee that brought me to the synagogue, for years and years on the Va’ad, on the Past President’s Council (which he of course called the Has-Beens), as the Chair and a member of the Ritual Committee ,and unfailingly showed up at every service, study session, va’ad meeting, high holy day planning meeting, Passover seder, Purim party and Pride parade.

Daniel was and is for me the embodiment of gay Jewish pride. He was self-integrated and self-actualized as a queer Jew before any of those words were in common usage, always believing in and living out these essential dimensions of himself with uncompromising integrity. I don’t know a lot about his childhood in the Old Country – Latvia? Ukraine? oh, Brooklyn! – but Daniel has always been out. When I met him, he was out as the loving son to his mother who lived in an Orthodox nursing home in Jerusalem. He was out as the loving gay uncle to his minyan of cousins, nieces and nephews, especially the children of his beloved sister who had died. He was out at work and out on the street and out on the front lines. He was most certainly out at home, where everyone loved to visit the bathroom to see the scientific poster of penises of the animal kingdom. And everywhere he was out, he was out as a faithful, committed Jew whose life-time project was this synagogue. Daniel was one of the representatives of CSZ to the Reform movement in 1979 when it became the second gay outreach congregation to affiliate; Daniel’s Jewish integrity and commitment were an important part of this effort; which I specifically mention it now because it resulted in the Congregation’s eligibility to seek with the Central Conference of American Rabbis, bringing me to Sha’ar Zahav in 1985 – for where else could a young gay rabbi imagine going? (Well, not to put too fine a point on it, at the time no one else would hire me either.) Daniel’s leadership in the Reform movement continued for decades after.

There are many stories about the origins of the name Congregation Sha’ar Zahav. It was originally suggested by a deeply closeted friend of the founders, Prof. Ze’ev Brinner of UC Berkeley’s Department of Near Eastern Studies. There are three explanations for the name, Sha’ar Zahav, the Congregation of the Golden Gate.

The first, of course, is the obvious one: its so San Francisco! . There used to be gold- colored kippot stamped “Congregation Sha’ar Zahav, San Francisco’s Gay Synagogue” (I think there is one on display downstairs).

Second, it was gay code. It is hard for us today to appreciate how closeted people were and how dangerous it was to be identified as gay. As early gay organizations formed, each big city had a slogan or code word that was shared by various organizations. In New York City, it was Gotham….Gotham this, Gotham that. In Chicago, it was the Windy City. In San Francisco, there was the Golden Gate Business Association, the Golden Gate Rodeo, Golden Gate Swing Dancers and several others….so Congregation Sha’ar Zahav was a coded, insider hint – you had to understand a little bit of Hebrew and a little bit of local gay culture.

The third meaning is about another Golden Gate, high on the Eastern wall of the Temple Mount in Jerusalem. High up on the wall, is a sealed gate. It is a couple of hundred feet to ground and the doorway has been bricked up for as long as anyone can remember. Jewish legend teaches, though, that when the messiah comes, a bridge will be built from the Mount of Olives across the valley and all will enter the Temple through the Golden Gate.

CSZ, the Congregation of the Golden Gate, has been the messianic hope realized for so many. People who felt that they had no place, that they did not belong, were cast out… CSZ was the open doorway to the sacred precincts.

But there is another legend about where that spot is…why the holy Temple – and its sha’ar, it gate – were located exactly where they were…To answer this, I must turn to another midrash. I must admit, I have given this part of my d’rash before, at Sha’ar Zahav in November 1985. I apologize for repeating myself and I also forgive you if you don’t remember it.1

We read in the Torah of the two brothers, Jacob and Esau, who never get along; even before birth, in the womb, they are already struggling!2 They are so different – Esau is an outdoors guy, he’s rough and tough, he’s big. He goes to Outward Bound, supports the NRA! He is so butch!3 Jacob, on the other hand, preferred to stay inside the tent — he liked to cook, subscribed to Gourmet Magazine and managed to survive through living by his wits.4 So femme! Trying to bulk up, to pass in the world more easily, he ate Esau’s high proten “red red” meat-porridge diet.5

Did I mention that Esau was his father’s favorite and Jacob their mother’s?6

1 A version of this modern midrash appears as my commentary on Parshat Va-Yeitzei in Drinkwater, Gregg, Joshua Lesser, David Shneer, and Judith Plaskow. Torah Queeries: Weekly Commentaries on the Hebrew Bible. NYU Press, 2009..

4 Genesis 25:27, 31. C.f. New International Version translation: “Jacob was content to stay at home among the tents.”

So he sets out on his journey of discovery. The Torah draws our attention to his departure; it is the name of the Torah portion.. Va’yeitzei Ya’akov. Jacob left. Jacob exited. Ya’akov yatza – Jacob came out!

Jacob is exhausted from the physical and psychic exertion and lies down in the middle of nowhere, a random place, ha-makom …and he has a dream. In this dream, he sees the doorway to heaven open to him, a ladder of possibility, of otherness from what he has ever known before. And there are others also climbing this ladder. 9

He looks up and says: “Achen yesh Adonai ba-makom ha-zeh…God is surely in this place! I am not rejected and alone! This place where I am, right now, this is Beit Elohim, the house of God. …v’anochi lo yadati. I had no idea such a place was possible!”10

At the top of this ladder, descending and offering a helping hand to each new arrival, with love and tenderness and understanding – for so many, for so many years – has stood Daniel. As the text says: “His feet firmly on the earth, his head reaching towards heaven.” 11

Daniel, may you go continue to go and grow mi chayil l’chayil, from strength to strength. Kein yehi ratzon – so may it be. Amen.

Board Member and Co-Chair, Education Committee 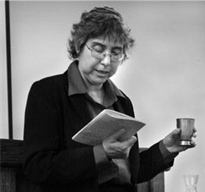 How Did I Get Here? High Holiday 5778 Drash by Irene Ogus 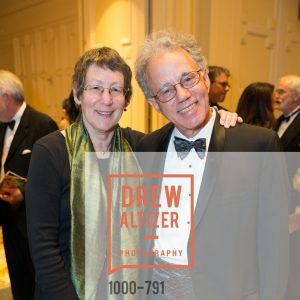 An Update on In-Person Events and Services Dear Sha’ar Zahav Community, We hope that you are healthy and well. We would like to update you on Sha’ar Zahav’s plans regarding meeting in person at 290 Dolores. Our Reopening Task Force met again on Thursday, February 10 and had a spirited conversation about returning to…

Wingsong: for all the friends who died of AIDS

Dear Sha’ar Zahav Community, The High Holy Days are behind us, but rather than being a slow time…we have exciting news! We know this is a long letter, but urge you to read through it in its entirety since there are lots of details and this is pertinent information for everyone. Our Shabbat evening service at the synagogue since…

In order to support Sha’ar Zahav attendees who are physically harmed when exposed to chemical fragrances (difficulty breathing, migraines, flu-like symptoms), please do your best to follow these guidelines when you visit our synagogue building: Refrain from wearing perfume/cologne Check your various products to see if there is a fragrance free version available Switch to…

There is no excerpt because this is a protected post.